We all try to teach our children about fairness,
and being good sports.
However I have found that in most cases,
children seen to naturally have these qualities,
so perhaps it is us adults who corrupt them.

The first time I pondered if this were the case,
was a few years ago.
I was teaching a group of swimmers,
who were aged between eight and eleven years of age.
They were at competition level,
and a gala was coming up.

I gathered them together to explain to them, 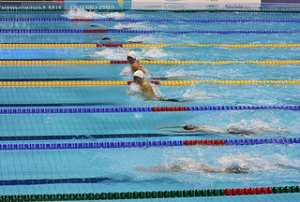 the upcoming set I was going to give them.
It was a breastroke set.

This was a stroke they did not really enjoy.
So my set was met with much moaning.
I began to tell them how important breastroke is,
to anyone who swims individual medley,
when a small girl of eight spoke up.

“Well, she said, I am very good at butterfly,
and backstroke so I can get way ahead,
then after breastroke I am good at frontcrawl,
so if I had to I’d catch up and win”.

I shook my head.
“No, I said it doesn’t work that way,
if you are good at breastroke,
and quite good at the other strokes,
the breastrokers will win”.

To further drive my point home,
I told them about when I used to race.
“I was good at butterfly and backcrawl, I said,
but when it came to breastroke, I would fly past,
and say so long suckers!”.

At this point my young lady of eight piped up again.
“Excuse me Tric, I don’t think that was a very sporting thing to say”.
I looked at her, remembering my mentoring role!
“Oh I said, I would not actually say it,
I would just pass them and think so long suckers”.

This I’m afraid still did not meet with her approval.
“I don’t think that is a sporting thing to be thinking either”,
she said.
I didn’t know where to go from there.
She continued, “Anyway, it doesn’t matter if you win or loose,
she said, just do your best like that girl you were racing”.

I was a competitor for years. 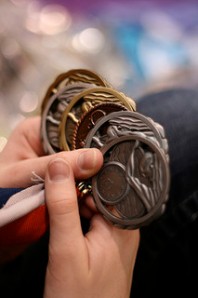 I knew when I was beaten.
She had well and truly bested me,
in every sense of the word.
I cut my losses, telling them that she was right,
and apologizing for being so unsporting.
I then sheepishly told them their breastroke set,
and continued the lesson.

However over the years our little exchange,
has continued to make me think.
It is good to encourage a competitive nature,
but now I am a lot more careful of how I go about it.
I have watched these swimmers,
cheer on and celebrate each others successes.
I have also seen them look after each other in defeat.
It would seem us adults have a lot to learn from them!
credit: Sum_of_Marc via photopin cc
photo credit: MissMessie via photopin cc

27 thoughts on “A Lesson Learned From An Eight Year Old!”