When I was a student nurse,
I worked in a childrens hospital,

as part of my training.
It was here I learned a lot about dealing with children,
from an amazing lady who would never have any of her own.

The hospital was in inner city Dublin.
It was surrounded by flats,
which were inhabited by “true Dubs”.
Many who lived in those flats,
were among the most disadvantaged people,
living anywhere in Ireland.
Some had drink and drug problems.
Most were unemployed.
But many were doing a great job parenting,
under the most difficult of conditions.

I was sent to work in the Accident and Emergency Department.
It was incredibly busy every day.
However as well as the large number of children,
who came seeking help,
we also had children from the flats,
who played hide and seek, or chase,
all around the department as if in a playground.
These children were often mischievous,
and some of them were also known at times to be light fingered!

The “sister” in charge was a nun.
One of the most amazing people,
I ever encountered in my life.
Her patience and genuine concern for these children,
was something to witness.
She cared deeply for every one of them,
and knew them all by name.
On many occasions I saw her,
gather up these kids,
and sit them down in her office with a big bowl of Ice cream!

I remember many of my days working there. 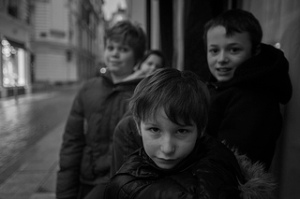 Some filled with joy, others terrible sorrow.
One day that stands out though involved these kids,
and had nothing to do with treating the sick.

This particular day we were run off our feet,
and had little time for our usual banter with the locals.
Break time arrived and the word went out,
that all our handbags were gone!

These handbags had been stored,
in a locked cupboard.
The department sister was furious.
She gathered together all the local kids,
and told them that the handbags were missing.
“Do any of you know where they are?” she said.

They looked at each other shaking their heads,
feigned innocence on every face.
“Sister, you doant tink we robbed ye, do ye?,
said one eight year old in his best Dublin accent.
She did not answer him,
instead looking at the motley crew she said quietly,
“I am warning every one of you,
if those bags are not back here in five minutes,
you will never again play in this department,
and there had better not be one thing missing from any of them!”
Much muttering and protestation of innocence were heard.
“Ah sister”, they said “We didn’t rob notin”.
She let a roar at them and they disappeared.

In no time at all I heard a clatter of running feet,
and our little gang returned.
“Sister, sister”, they roared.
Out she came and they gathered around her.
“Sister we found the bags” they proudly announced.
Seven little pairs of hands,
held up the “lost” bags.
“Wow, said the sister, where did you find them?”.
“Jus lyin round de corner”, said one small boy.
“Is anything missing?”she asked.
“Notin sister, its a miracle!”, said the eldest boy
One little boy, a regular player in the department repeated,
“Sister it really is a miracle!”.

I smiled to myself.
I had worked with many other sisters,
who would not have got this result.
This amazing lady continued to work in that department for many years.
A much loved member of the community.
An inspiring “sister”,
and even “mother” to many.
A lady, a nun,
who taught me lessons on life, love, laughter and children,
that I could never learn from a book.