Yes, there are some things I did as a younger me, which perhaps I would not be overly proud of today. I would like to think I am not the only one. I was a bit of a ‘devil may care’ individual when I was younger. Someone who, here in Ireland, we might call ‘a chancer’.

However there is one incident I remember which perhaps I should be ashamed of, but guess what? I’m not!

It happened when I was a newly qualified nurse. I was working night duty on a ward, but I also was responsible for another smaller ward, which was looked after by a student nurse. During the night I would regularly call over to her to ensure all was well, and to supervise the drug rounds.

Night duty is often a very busy time, as patients who are sick tend to continue to be unwell by night, when there are less staff on duty. Many nights I worked twelve hours with no break. On busy nights such as those, it was always a delight if a patient gave us a box of sweets. They were greatly enjoyed by all.

However on the ward I was relieving, if a patient gifted chocolates or sweets for the nurses, the ward sister thanked them profusely, and then locked them in a press. She would later give them to the kitchen staff, consultants or, who knows who, as a present. Anyone but the nurses.

One night I called over to this ward, with a box of chocolates we had been given, to share with the student on duty. While I was there the nurse remarked that she had been given a box of sweets when she came on duty that night by one of the patients, but the nurse in charge had locked them away before going home.

In a flash I could feel my temper rise. How dare she? That patient had specifically kept them for this young nurse. I was so cross. The student nurse was sitting down at the desk. I asked her to move, and sat myself down. The desk had a locked cupboard to the right with a drawer above it. In the locked cupboard were the stolen boxes of chocolates. I carefully removed the drawer and lo and behold, we now had perfect access to the chocolates below.

Much to the students horror I began to unload the cupboard. All sizes and shapes of boxes of chocolates and sweets. Some were still wrapped. It was almost Christmas, I knew most of them would be given to the consultants and kitchen staff as ‘gifts’ from the ward 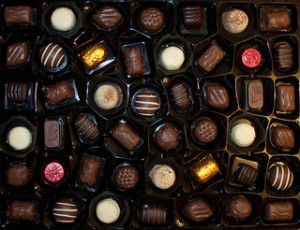 Without a worry about the rights and wrongs of what I was about to do, I asked the nurse which one she would like us to open. She was shocked, and didn’t want to have anything to do with the ‘robbery’ . Not one bit deterred, I settled on a very large beautifully wrapped box, which I suspected contained chocolates I loved. I carefully unwrapped it and took out the chocolates. I opened them up and was delighted to see that there were two layers. I chose a few of my favourites and tucked in. Then I left for my own ward, leaving the chocolates on the desk.

Returning to my own ward, my fellow nurses all got a great laugh out of what I had done. Most of the nurses in the hospital were aware of that particular ward sisters policy re chocolates, and no one thought she was right. Worryingly my companions that night all agreed they would never have done what I did.

Unrepentant, I returned to the ward later to discover the student nurse had succumbed to temptation. A large majority of the chocolates were gone. Rightly or wrongly I was delighted. The student asked would I please take the remainder up to my own ward when I was going as she didn’t want, any ‘evidence’ left around when the ward sister arrived in the morning. I smiled and told her I had a much better idea.

Here is where I possibly crossed the line…. I removed every chocolate from the almost empty top layer. I then put the emptied top layer on the bottom, beneath the full layer. I carefully re wrapped the box of chocolates. Removing the drawer once more I placed the half full, beautifully wrapped, box back in the cupboard, and with a huge amount of satisfaction I returned the drawer.

It was almost morning. Work continued, and eventually it was time to go home. As I left the hospital that morning I was still highly amused by what I had done, and even more delighted to imagine, hopefully a consultant, receiving those chocolates for Christmas, and discovering a layer missing. In my imagination I went one step further, I imagined him ‘gifting’ them to someone else, unaware they were half eaten!

I slept happily that day, more than satisfied with my nights work. Twenty years later is it wrong that I am still satisfied by what I did that night?

Maybe you can identify? Feel free to share, I’d love to know I am not alone.