My latest from the Irish Examiner’s Feelgood. You’d never guess my birthday was approaching when I wrote it?

At what age do we become old? Is it an actual number or a state of mind?

Anyone with children will know, regardless what age we are, they already consider us old.

My aging began in my twenties when my eldest child went to ‘big school.’ One day, shortly after starting she returned home a little pensive. I caught her looking at me and sighing. I immediately panicked wondering if she was the victim of a cruel bully?

My heart broke a little as I sat her down and asked what was wrong.  She sighed, took a deep breath and said, ‘I was just wishing you wore dresses like the other moms.’

There it was,  the beginning of the end of her belief that I, her mother, was 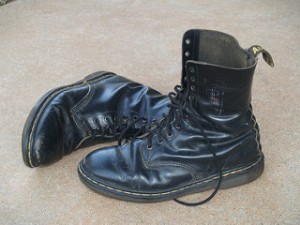 perfect and beautiful. It was all downhill after that as over time she became ever more critical of my jeans and love of Doc Martins.

It’s safe to say my sense of style has not matured with age. Child number four has had to cope with an older mother whose hair shines an unnatural purple in sunshine and who continues to love Doc Martins.

However, I think I’m finally beginning to feel the age my children have always believed me to be.

This is especially true when clothes shopping. Last week while out with one of my daughters I cringed as she and I entered the same shop. She fitted right in whereas I looked like I’d strayed from the sensible old ladies department by mistake.

I was in the midst of a serious wardrobe issue, having recently completed a major clear out during which I’d discarded everything I’d not worn in the past year. I was thrilled by my spacious wardrobe until the time came to go out and I’d not a stitch to wear.

So ignoring the masses of young belly baring, skinny jeans girls I bravely entered the shop, after my daughter left of course. After all there are different levels of bravery!

Rather quickly I spotted a top I fancied, only to see what I can best describe as a 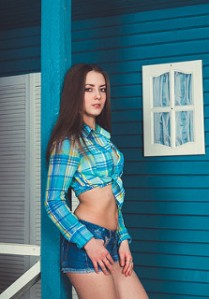 child pick up the same one. Immediately I fancied it a little less and dumped it. Eventually I made my way to the fitting room with two tops I hoped would not prompt the comment, ‘mutton dressed as lamb.’

The trendy fitting room was one of those designed by someone too clever for their own good. Mirrors were hung to show you at every angle. I searched in vain for my good side. My hair looked as if I’d just woken from a coma and my face even scared myself. Not bothering to take the tops out of the bag I ran, discarding both on the way.

Traumatised by what I’d seen I decided to take action. For four decades I’d lived make up free, but that face needed help. I entered the scary make up department wondering where the miracle cream was? I soon discovered that even if it was there I’d not find it as I couldn’t read any of the labels.

So I decided to face the truth and make the one purchase I was old enough to make, a pair of glasses. I quickly selected a pair, as inside I cried a little. At the til I cried a little more when the shop assistant handed me my change.

€4? That meant I’d paid sixteen euro and not the six I thought the tag said.
At home a while later my daughter showed me the teeny tiny top she’d purchased.

“What about you Mum, what did you get?”

I thought about declaring my new glasses, but even at €16 I wasn’t proud of them.
“Nothing,” I said. “I think online shopping might suit me better.”