There is little in life so tragic as the loss of a child. For the parents it is a nightmare from which they can never wake up,  for siblings it is an immeasurable loss, for the extended family a burden they too will always carry.

Yet the ripples from the loss of a child are widespread, affecting the whole community.

When I heard young Ben had been taken ill, it was a number of days before we realised how sick he was. When the news filtered through he was not going to make it, I can remember sitting holding my youngest in my arms as she cried uncontrollably, thinking of small Ben, his parents and her close friend, his sister.

In the wake of such a devastating loss there is a sense of helplessness within the community. We see his family, and we try to imagine their pain, but there is very little anyone can do to make it any easier. Grief is a long and lonely road and regardless of help and companionship, it is a road they mostly travel alone.

Yet even though at times they may think in their grief we have all forgotten them, we do not. Today in my communtity we proved just that.

Young Ben was only in school a little over a year when he passed away, leaving schoolfriends too young to understand 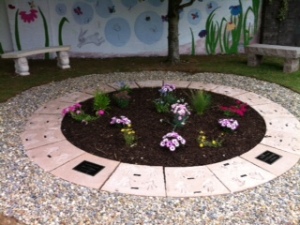 where he had gone and a school in shock. In recent weeks the school have had great plans to remember Ben, and also to remember another young boy, Eoin, who also passed away ten years previously. Today we all got to see the results of their thinking. A beautiful garden for Ben and Eoin.

As you can see it is in the shape of a circle. Each paving slab is imprinted with the handprints of those young schoolfriends who were in Ben’s class. The paving slab next to Ben’s plaque has the handprints of his sister and the one next to Eoins has those of his twin brothers. The circle shape means both Ben and Eoin are surrounded by friends. The wall behind was painted white and decorated with butterflies. The butterflies were painted by their classmates and Bens sister and Eoin’s brothers. Sitting beneath the trees it is hard to believe you are in a school, as it is such a peaceful spot.

It is only right to remember small Ben and Eoin in the surroundings where they were once so happy. Ben loved school, and today his school welcomed him back once more. The communtiy has spoken, the boys have not been forgotten. As Fr Charlie blessed the garden he gave a mention to young Daniel who also attended this school before leaving for secondary. As I sit in this garden I have no doubt he and I will have a few chats.

When the singing and speaking was over there was a final reflection read out. I think it was perfect. It is called the Unfinished. I cannot find an author so if anyone knows let me know.

We cannot judge a biography by its length,
Nor by the number of pages in it.
We must Judge it by the richness of its contents
Sometimes those unfinished are among the most poignant.

We cannot judge a song by it’s duration
Nor by the number of it’s notes
We must Judge it by the way it touches and lifts our souls
Sometimes those unfinished are among the most beautiful.

And when something has enriched your life
And when it’s melody lingers on in your heart
Is it unfinished? Or is it endless?

I think it is only fitting to say a big thank you to Ballygarvan Concrete. When they heard what the paving slabs were being used for they waived all costs. They were also very patient with thirty young boys and girls, as they made the slabs and put their handprints on them.

Finally a big thank you to all who organised and worked on this within the school. I know you spent many hours on it. Well done.

22 thoughts on “Today we remembered Ben.”