Todays guest repost comes from the blog of  Awfully chipper, a fellow Irish blogger living abroad. I think it’s a beautiful post, but I’ll leave you make up  your own mind.

There’s a road I walk along often in my dreams. The sea is on one side, a high wall on the other. The waves tend to be choppy and white-crested, the weather harsh. I am trying to get to an exam, or walking an impossible route to catch a train, or late for a performance of something unlikely. I may or may not be missing some clothes, or have lost my glasses. Maybe I’ve only visited this place once or twice in some very vivid dreams, but it feels as familiar to me as a path I tread every week.

I’ve always known exactly where it is, because this place exists in real life – though the wall might be a little craggier and the sea a little wilder in my dreams. It’s near my old school, by a tiny local harbour with a marine-supply store my dad often went to. I don’t know that I’ve ever walked that particular part of the path in reality, as it’s beyond where we’d turn off to go down to see the boats, and I’d never need to go further by that route – but in unreality, it plays a frequent role.

I have no idea why my subconscious chose this place as the site of so many incongruous and frustrating adventures, and it had been a long time since I went there in person. I was driving to my parents’ house a few days before Christmas, and I took the sea road, as we often do when we’re home – I like to see the sea. The road turns up inland after a little and we usually follow it straight up the hill, but this time I turned back down a smaller road to go past the harbour.

There it all was: the stone of the tiny pier; the narrow concrete path, single-file wide; the sheer, slightly mossy granite wall – I probably hadn’t been there for more than a decade, but I’d seen them all so recently and so regularly that if I stopped to concentrate, my feet and my fingers could trace every inch of it.

We didn’t stop, though, because while in my dreams I’m usually alone, singular, in the daytime world I had two cantankerous and jetlagged children in the back seat, who were getting tired of being told to admire the sea. 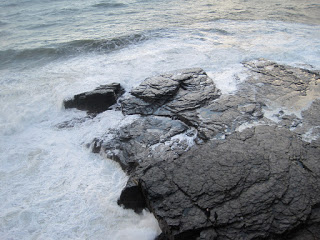 But it is a rule. The sea is always there, and even when I’m an ocean and a landmass away, I have to stop and look at it in my dreams.