Last week I pressed ‘send’ to an email, before immediately regretting it as I walked into my kitchen. I’d just arranged a meeting with someone who’d never been to my house and my messy kitchen didn’t strike me as visitor friendly.

With twenty-four hours to go I made a half-hearted attempt at remedying the situation, clearing away the two weeks of newspapers lying around and moving to new locations various items littering the dresser.

Rising the following morning I wondered was I a character in the movie Groundhog Day? My previous day’s efforts having been erased by yer man and my children who noting the cleared surfaces had felt the need to re-fill them.

Was this the first impression I wished to give my visitor? I glanced at the clock, relieved to note there were a few hours left to remedy the situation.

As I began to tidy, I was struck by how many items were things I’ve been putting away for years, but which reappear almost immediately. This morning there were no less than three phone chargers on the counter which told me yer man had, once again, mislaid his working charger and in desperation pulled these three out of the ‘junk drawer’. Two don’t work and the other one pretends it’s doing the job but never fully charges a phone, even if left plugged in for days.

Instead of accepting they don’t work and immediately binning them, I returned them to our 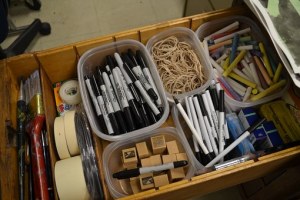 junk drawer. This is a drawer, full to the brim, of anything and everything no one wants to dump or find a proper home for. I wondered what Marie Kondo would think of such a drawer?

In case you’re the one person in the country who’s never heard of Marie Kondo, she’s a Japanese lady who loves tidying and decluttering and is making a fortune doing just that. She says we should throw out anything which doesn’t ‘spark joy’. Well, that’s all well and good but I suspect top of my daughters list would be her school uniform and books and I’d happily chuck out anything to do with cooking dinner!

Looking at our bulging junk drawer I decided it was time for action, but unlike Marie Kondo wondering if its contents ‘sparked joy’ I asked myself, were they of any use?

First out was a rechargeable battery charger, stored in there for years. Dump or keep? Well, if we ever have batteries in need of recharging (which we don’t) we’d certainly need it. So, I began a ‘keep’ pile. What about the ancient digital camera sitting beside the hairbrush no one knows is in there? It was a ‘good camera’ in its day. Maybe it still works? Best err on the side of caution. So, it too landed in the keep pile.

Within minutes my keep pile covered the entire table. There were not one but two screwdrivers, both different colours but otherwise identical, numerous candles and cables, a tape measure, keys of all sizes and a cassette tape. Scattered throughout the drawer was a fortune in foreign money and right at the back sat a tin whistle, ‘lost’ six years ago after a particularly painful homework music lesson.

Did any of it spark joy, I wondered? Should I bite the bullet and dump everything? But what if I needed those candles? Or we decided to return to Vietnam one day? Not to mention the worry of yer man having a heart attack when I showed him the empty drawer?

So, I returned each item and well behind time abandoned all thoughts of Marie Kondo’s clearing in favour of the Tric Kearney method of ‘decluttering by hiding things’. And, you’ll be pleased to know, the resultant, superficially tidy kitchen, did indeed spark joy.