Here is my latest article in The Examiner’s Feelgood supplement…When is a lie a lie?

Last week, I happened to remark during a family chat, that my children were not very good at telling lies.”That’s because you are such a liar Mum.” they chorused. Really? That didn’t strike me as a very loving thought, a fond memory to hold of their dearest mother? So I challenged them.

“I don’t tell lies, only stories!”

“Mum, you lie every day,” they chorused.

Wounded, I tried to explain the difference between my lies and a good story, but they were not very receptive. This evening, as I remember a recent ‘story’ about car keys, I wonder if they were right?

Days before Christmas my car keys were ‘lost’. One of my daughters was the last to have them. This was a glorious turn of events, as it was usually I who had mislaid them.

Imitating how helpful she is when the roles are reversed, I watched her search. However, I needed to go out, so using the spare key I 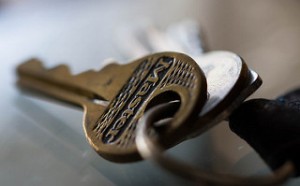 left. Nearly one hour later I returned, to discover she was still searching and appeared to be a little unhinged. I watched as she looked in the freezer, the fridge and the washing machine, having already been through the recycling bin. Her sister had joined in, in a rather faint hearted manner and guilt led me to do the same, for all of five minutes, before a cup of tea called.

The two searchers joined me at the table, one a lot more frazzled than the other.

“Obviously not everywhere.” I replied, mimicking the words spoken to me daily.

“Well I can’t think of anywhere else. I’ve checked the car, the boot and the whole down stairs. Everywhere…” her words drifted towards the end, as she shook her head.

“Don’t worry, they’ll turn up when we stop looking.” I assured her. “That always happens to me.”

“Imagine Mum, if after all this time it was you that lost them?” suggested my other daughter with a decided glint in her eye.

“No way. I’m not taking the blame this time.” I protested. “Remember, she came in last and locked the car? However at the very moment I was vehemently denying any wrongdoing a very tiny door in the recesses of my memory began to creak open. As I looked in I saw a back room upstairs…a search for a scarf…keys placed on a shelf…oh please no…surely not?

I excused myself and casually walked upstairs, my heart racing, “Please let them be lost. Please don’t let me find them!” I made my way to the shelf of my memory flash and horror of horror there lay the keys. Quick as a flash I pocketed them.

Returning downstairs, without thinking twice, I placed them in the crib, right behind baby Jesus (I’m sure there’s a sin there

somewhere) and returned to the kitchen where Frazzled was sitting, shoulders hunched, head in hands.

Just then the front door opened and the answer to my problem, daughter number three, arrived home.

“Your sister lost the car keys.” I said, busily typing a text.

Her phone pinged in the background, which may or may not have received a message saying, “The keys are in the crib. Find them. Say nothing.

Two minutes later she returned shaking the car keys.”Baby Jesus had them.” she beamed, sharing a conspiratorial wink with me as Frazzled sat, mouth open.

So now I am left to wonder, was that indeed a lie, or a perfect example of story telling, where everyone lived happily ever after?

photo credit: Captured Heart Have You Seen My Keys? via photopin (license)