I’m not one for religion or an after life with Jesus or whoever, but every now and then I can appreciate what it is for others to have faith. Wednesday 3rd August was Mass in the Graveyard night in the village where I live. This is a huge event all over Ireland, where once a year, in every small town and village in the country, mass is held in the local graveyard. It’s not held on the same day everywhere, but usually it’s around the first week in August. On this evening, people come from all over the country, some even travel from their homes abroad, to stand near their loved ones graves, to hear mass and have the grave blessed. My own mum traveled to Donegal, her holidays always coinciding with the graveyard mass, where her parents and sister are buried.

So off I headed to stand beside young Daniels grave, with some of the members of his family. The graveyard is relatively new but each year the crowd grows as it slowly fills. As usual the weather was definitely not Summery with a strong wind blowing, temperatures mimicking late Autumn and an ominous dark sky.

I was immediately struck by the numbers gathered, knowing each had a story to tell. Mass began but in truth I tuned out of what was being said, and into the faces, ages and number of others gathered. As I looked about I tried to imagine young Daniel if he were present. He’d be sixteen now, tall, voice broken, possibly still blonde, but despite my best efforts the handsome young thirteen year old he was three years ago is all I could see. At times I could even hear him! Standing beside his grave I felt angry and immensely sad, for the life he’d not lived and the one his family were living without him.

As the mass continued I wondered at the place religion had in the hearts of those gathered and how much comfort they got from it? 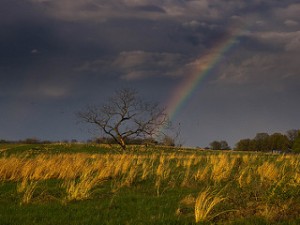 Was it easier for them believing they would meet their loved one again? In the freezing cold and biting breeze it felt very graveyardish, if you can imagine what I mean, bleak, a place of sadness and loss. I looked away to the surrounding hills in the distance and the racing dark clouds above, searching for a different view, some hope perhaps and less sadness.

It was then I saw it… the faintest of rainbows. Not the most vibrant one ever painted, but nevertheless a clear, distinct rainbow gathered above our heads. As I pointed it out to my children I saw others also noting it.

It didn’t stay too long, but after it had faded the mood among many had changed, some were praying louder, while others let tears fall.

Was it sent by God or lost loved ones? Was it a coincidence? Does it really matter? For in that moment, regardless of what brought it about, a short lived rainbow had come to brighten up a difficult day, comforting many along the way.