Help. I need help!
Well actually it is not just myself who needs help, but my dog. She is, as far as I can see, in serious need of psychiatric help.

Up to two days ago she was a cute, darling, lovable pet, who loved playing with a ball, second only to sitting on my lap.

Then we decided that it was time for a haircut. Now she usually has lovely short hair, which I brush regularly. However the Summer came, and she found the sea, and she found she loved the sea. Then I found that the sea doesn’t really agree with her lovely coat. Before we knew it knots had appeared. Our gorgeous little lady had some very large knots, which would mean only one thing…. she would need a very tight haircut, or in plain English, a shave!

So off she went on Tuesday, happily skipping along, tail wagging, for her ‘haircut’. She hasn’t been seen since!

I collected the little darling after three hours. Oh dear God, the state of her. She is like a shorn sheep, but with a cute face. However it is her tail that is the biggest problem. It has been cut short, but with a plume of hair at the end. This tail is the main source of my dearest little ladies fall into lunacy.

You see, up to now, she didn’t know she had a tail. Yes she wagged it regularly, but that was it. However since the hair cut she has discovered she has a tail, or as I think she would put it, a stalker! She walks a few steps and then takes off, in a crazy bid to outrun her tail. Sometimes, accepting that she cannot do that, she spins around, and around and around, chasing that fecker. Eventually she ‘catches’ it. When she does, in a fit of fury, she bites down hard, just to let it know how she feels about it, and then howls as she discovers it is actually a part of her.

In the two days since she got her hair cut, she has been demented. Instead of relaxing on my lap, as if on a tropical beach, she jumps up every few minutes, to a ridiculous height, and tries to nip that stalker. When not in attacking mode she sits crying, and at times she decides it’s all too much as she barks her head off, looking at that ‘thing’ behind her.

While I love dogs, up to now I have never lost it over them. However I think this lady has pushed me over the edge. Today, watching her jump, cry and bark, I even contemplated getting her a dog coat, so she can no longer feel her tail. Yes, a dog coat, I greatly fear I am losing the plot!

Unless any of you have any better advice, it looks like a dog coat is coming my way. Although my daughter is convinced a pretty dress would work better! Tonight, like a baby who has had a fretful day, ‘Ratty’ is lying asleep in a state of exhaustion. There is peace in the house at last.

Tomorrow is another day, and I greatly fear, both she and I, are heading for madness, as I resolve to never allow her into the sea again. Help. 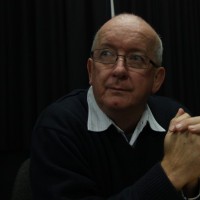