I have often wondered about this.
My own brothers and sisters are all fairly diverse human beings,
yet share common characteristics.
For instance I discovered recently that three of us are avid diary keepers.
Yet how much of what we have become is down to genetics,
and how much is down to our environment and upbringing.

Well I would like to inform you all that I have the answers.
My extensive study involved twenty years of parenting.
The results are conclusive.

One of my first encounters with nature v nurture came when my eldest was seven.
I was driving a group of four children home from school.
Two of the children belonged to myself and my best friend,
who also stayed at home.
The other two children were the children we minded,
Their parents were in the police force, and accountants.
They were discussing what they would like to be when they grew up. 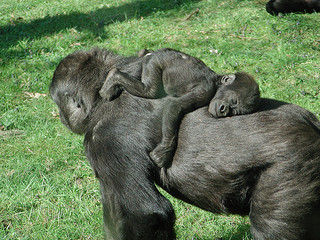 No marks for guessing which children said which.

I cannot begin to say how much this upset me.
It was proof positive to me that nurture wins.
If I was still working my child would have ambition.

I thought I was the worst role model ever.
Despite the fact that I had chosen to stay home to rear my children,
there was no way I wanted my daughter to decide on that “career” at such a young age.
I fretted over it for a long time.
I could see how much she modeled herself on me.
I thought I’d have to get a job!

I didn’t.
Instead I had more children.
With each child I saw the huge influence a mother has over them.
Especially staying at home,
we spent a lot of time together.
Secretly I grew happy to be such a powerful figure in their lives.

The years rolled by.
They grew older,
one is gone to college,
two are teenagers,
one is still young,
And guess what?
After all my years of guidance, love and enormous influence….
They are nothing like me!

They have grown into my husband!

Nature v nurture I have the results.
100% nature!