As some of you know we lost a member of our family last week. Our fit, seemingly healthy cousin, gone in a moment. As the week has passed by, I have wondered how those Anne left so suddenly are getting through. She was a wife, a mother, a sister, a friend, so huge a presence in many lives, how do they fill that void. How do they make sense of her loss?

Yesterday as I tried to process the suddenness of her passing, I saw a post in my Facebook feed. It was written by her sister and simply titled, ‘Reflecting on the untimely and sudden death of my sister Anne (October 1960 to 25 February 2016) RIP.

Beneath the title was printed a poem, the same one she so bravely read at Anne’s funeral. As I listened to it in the church last week, it spoke to me about the loss of my Dad, like nothing else ever has in almost thirty years. It was also perfect as a reflection on the loss of Anne, such a huge character, from so many lives, and young Daniel also.

So as I reprint it here, I hope that those of you who have lost someone you continue to greatly miss from your lives, will get as much from this as I did.

Gone From My Sight

I am standing upon the seashore. A ship, at my side,
spreads her white sails to the moving breeze and starts
for the blue ocean. She is an object of beauty and strength. 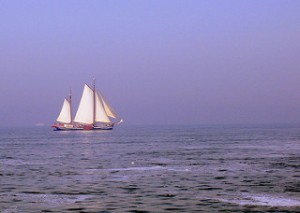 I stand and watch her until, at length, she hangs like a speck
of white cloud just where the sea and sky come to mingle with each other.

Then, someone at my side says, “There, she is gone.”

Gone from my sight. That is all. She is just as large in mast,
hull and spar as she was when she left my side.
And, she is just as able to bear her load of living freight to her destined port.
Her diminished size is in me — not in her.

And, just at the moment when someone says, “There, she is gone,”
there are other eyes watching her coming, and other voices
ready to take up the glad shout, “Here she comes!”

And that is dying…

photo credit: Sailing on the Waddensea 2 via photopin (license)