Have there been times in your life when you achieved the impossible?
When others thought you couldn’t, but you did? 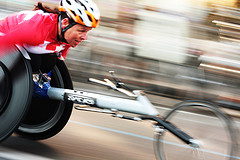 When you were given the odds against you, but you beat them?

I am sitting here watching rugby. Ireland v New Zealand. Normally that would mean watching some of the match with my eyes closed, catching up on forty winks. However I can’t take my eyes off it.

All week in the papers and on the radio I listened to the “experts”. I know nothing about the match, the rules, or the game. I didn’t need to to understand what they were saying. Poor Ireland were to be beaten. It would not be any ordinary beating. It would be an annihilation.

So Samson and Goliaths battle began at 2pm Irish time. Watched by most of the country.
Within minutes we were roaring. Ireland had scored a try.

Since then it has been both brilliant and sickening to watch. With fifteen minutes to go Ireland are still winning. The atmosphere is electric. Maybe we can do it?

It has made me think about the power of self belief.

Many years ago I used to compete as a swimmer. I was an okay swimmer and achieved some honors in the world of Irish swimming. However my greatest ability was to believe I was going to win. I never entered a race believing I would be beaten.
That is not to say I was always the winner. Definitely not. I lost plenty.
However I always believed I could win.

As a very young swimmer I was given a poem written in the early 1900s by Walter D Wintle . I have kept it to this day.
At the time it very much applied to my competing, but as the years have rolled by I have used it to focus me in ordinary times

Over the years I have shared this poem. Occasionally with young swimmers, who may have lacked confidence or were in need of a pick me up. I have also shared it with others who were not competitors in sport.

The last person I shared it with was my young warrior friend, who had leukemia and is recovering from a bone marrow transplant. He is living proof of this poem. On so many occasions he could have thrown in the towel and called time on life and recovery.
However statistics and odds never seemed to apply to this boy.
He is winning today because “He thinks he can”
.

As I focus once more on the match there are just eight minutes left. As I write the ball is

metres from the line and Ireland have another penalty.
The score is 22 to 17 to Ireland. If Ireland score this and get another 3 points it looks like history could be made.You could hear a pin drop. “The crowd who were hoarse from singing “The fields of Athenry” only moments earlier, sit in silence.

The ball is kicked…… Wide! No three points.
Have we lost our chance at making history?We are down to the last four minutes of the game. With all my heart I hope that these boys continue to believe “they can”.

The crowd are going wild. Two minutes to history. Hearts are racing.
As we watch men being flung all over the pitch, we don’t care, just as long as those green jerseys keep that ball.

There are now only seconds left. Sampson is going to beat Goliath! The crowd are beside themselves.There are but a few seconds remaining. Our hearts stop. Ireland have lost the ball to the All Blacks. There are only moments left. The All Blacks are very near their own line. They battle is relentless. When will it end? We are all sick.
Surely sport could not be this cruel?Oh no. Hearts stop.

For fecks sake we concede a try! It’s a draw.
The crowd are sickened. The Irish team are devastated.

However this is not to be the end of our misery. The All Blacks now have a chance to convert to win the match. We wait. The ball is kicked. Wide!
It’s a draw.

But wait, Ireland moved on the line. It is to be taken again.

We all collectively feel it is over. Yet we still hold our breath.
No mistake this time. The ball is over. They win, we lose.

Sport can often mirror life. Today if you’re Irish it was cruel.

Maybe in the end New Zealand were the team who really thought “they could”?
Or maybe today Ireland showed, “we can”, and with such belief they very nearly did.
Well done boys.