I’m sick. It’s a seasonal illness I have and it’s fairly contagious as far as I can see. It’s Christmas Fever. Symptoms vary but include, twitching, lots of sighing, a feeling of panic, a worrying loss of short term memory leading to walking into shops and not knowing what I wanted, sleepless nights, crazy dreams involving no parking, credit card being refused and arriving home to discover I bought the wrong size…or maybe that wasn’t a dream?

It’s been a very busy week, with another mad one about to begin. I’ve had seven articles to write for my weekly newspaper column in the past three weeks and thankfully I’ve only one left to finish. Next week, due to my great connections, I’ve managed to secure a visit

from Mr Claus himself to see my young swimmers in their final nights of swimming. However Santa seems to be on a bit of a go slow so it’s up to me to provide him with a total of 220 party bags, bought and made up by me. It is a little time consuming to say the least, but the excitement when he rings the bell and appears at the pool will be well worth it.

As I sit here tonight I am relishing the silence. Time to unwind and step away from all the madness of the season. Later I will turn off my laptop, put away my phone and just be. I hope it’s enough to recharge my batteries.

My family have been hassling me to make a wish list. We all make one, putting on it all sorts of big and small things we would like to get for Christmas and then by magic, some of it appears under the Christmas tree. However I am struggling with mine, for in truth I want for very little. I’m not into clothes or makeup and I have a kindle so buy myself books regularly.

But if I were to ask for just one thing for Christmas what would it be? And you? What would you wish for? 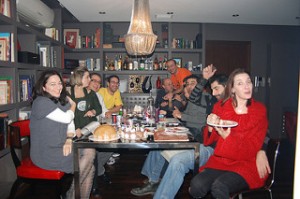 Given that we cannot bring the dead back to life, I’ll not ask for my dad or young Daniel to reappear so what would I really like? Well, the one thing I’d love above all else is actually not a present anyone can buy me and if I do get it this year, which I hope to, I expect it to be late.

For the one thing I’d love this Christmas is for the world to stop turning, just for a few hours.

In that time there would be no need for phones or the internet. The doorbell would not work and all six of us, my children, himself and myself, would be at home together.  We would be gathered in the sitting room where the smell of the Christmas tree and cinnamon candles hits you full on as you walk in the door. There would be a movie or programme on TV we would all be enjoying, rather loudly, as everyone would have an opinion on it. Perhaps when it’s over we would pull out a game, such as thirty seconds and come close to killing each other in our quest to be on the winning team.

Then, just before the world begins to spin once more, the moment would freeze.

I would then take the time to look about me. I’d see my husband of many years laughing, my children and dog in various animated poses, obviously enjoying the moment. Despite the silence I’d continue to hear the echo of their voices around the room and drifting upstairs. Finally, I would take that moment and place it where so many other precious moments are stored, never to be forgotten, no matter what the future holds. All that I’m most proud of gathered about me.

But I can’t put that down on a list or my children will freak out, so perhaps new pyjamas will do?

20 thoughts on “What is your one Christmas wish?”