Todays post in my series of guest reposts comes from the blog of bumbles of rice (a fellow Irish blogger!). In her email she explains why she chose this particular post to have a second day out.
“As a mum of 3 small kids I do my best but I feel I’m being judged every time I bring my kids out in public, this post tries to explain that”.

I know that by writing this post I’m in danger of being labelled “one of those” parents. 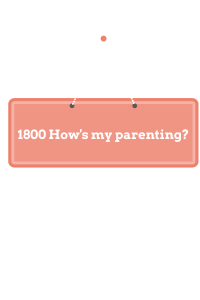 I’m not sure exactly what that means, which colour coded bin that I’ll be fitted neatly into, but it seems to me that as a parent every interaction that I have with my children in public is being watched and judged by a bus full of backseat drivers. I’m not sure how I’m doing but recent events would indicate that some feel that I could try harder.

I’ve already vented about toddler tantrums and how the intervention that I experienced frustrated me so much. I’m in danger of becoming a moaning minnie.

But today things reached a new low. I was berated for my parenting by a complete stranger. I’m still not the better of it as I this type this hours later. Here’s how it happened:

I was in a coffee shop after school, one we hadn’t been to before. We were all getting a treat after doing some supermarket shopping. I had the two boys in the queue with me, Mam was at our table with the baby. One boy was tired and a bit sad, the other was a bit excited and giddy. I was giving my attention to the tired one who could turn whingy at any moment and trying to prevent any tantrum activity. My older boy stood quietly in front of me in the queue waiting for the barista to produce our drinks after we had paid.

As we waited the lady in front of me in the queue nodded at me and drew my attention to something that my five year old was up to, my own view being slightly blocked by the counter. I looked and saw that he had taken the chocolate sprinkle shaker (or whatever it’s called) and was merrily shaking it all over the plate it was on and on the counter creating a big chocolatey mess.

He’s five, only five, but he knows better. When I saw what he was doing I immediately sighed, said his name crossly and jumped into action, tugging his jacket to pull him back from what he was doing and to get his attention.

My queue mate changed her tune. “Ah he’s OK” she told me, him watching on. “He’s not” I replied, “he knows better”. I did the textbook stuff, I got down to his level and made eye contact. I asked him (crossly) if he knew what he had done wrong and he nodded. I told him that what he had done was was bold (label the behaviour not the child) and that he would have to apologise to the barista for making the mess.

He accepted this, apologised and she said “it’s fine”. That should be where this story ends. But that wouldn’t have me writing about it, so you know that it didn’t stop there.

After the brief apology my son and I returned to normal. My queue-mate didn’t think things were done. She continued to tell me “ah, it’s OK he’s only a child, he’s fine”. The boy was listening, hearing mixed messages from two adults. He knew that he had done something that he oughtn’t have, we’d dealt with it, but here was another grown up telling Mammy that what he had done was OK.

I took a deep breath.

Calmly (I hope) I explained that her saying that it was OK wasn’t helpful to me at all, as I was trying to teach my son right from wrong and that making a mess of other people’s things wasn’t OK.

She didn’t expect my protestation, of that I am sure. She looked slightly aggrieved and nodded her head. One of her drinks arrived and she walked to her table to deliver it to her companion. When she returned a few moments later I was still waiting.

She couldn’t let it lie and she engaged “Children should be let play” she told me assertively, her voice assuming a cross tone. She looked satisfied that she had stood up to me.

I saw red. In fact, I saw many, many shades of red. Steam may have come out of my ears.

I would love to be able to cite verbatim what I said but I am shaking even typing this now. I was FURIOUS. I felt undermined, I felt betrayed, I felt ashamed. In those five words this woman that I had never seen before was judging me, judging my parenting and how I treated my children.

Perhaps she had been watching me go around the adjoining supermarket chasing and calling after the boys who were up to hijinks. Who knows? For whatever reason she felt that she needed to get this off her chest and that I needed to be told.

My calm tone left me.

I assured her, that my children are let play, that they play a lot, and that she had no idea. I explained that I was trying to teach them right from wrong and the last thing that I needed was someone disagreeing with me in front of them. I told her that I know my children. I said a jumble of other things in my defence that I can’t remember exactly(but no swear words honest, I wasn’t going to give her another stick to beat me with).

She had hit a nerve. After observing one isolated incident she had questioned my parenting.

I took it as a personal affront, I can’t think what other way it was meant. I didn’t expect to have to prove how good a parent I was in a coffee shop. I wanted to give her evidence, to show her the permanent art table in my dining room, the scribbles on my walls, I wanted to tell her how much I let my children play, how we adventure, how we collect sticks and jump in muddy puddles, we bake together, we get up to silliness. I had no reason to make a case in my defence, but in those five words she made me doubt myself, I was shaken.

What I didn’t say, what I didn’t ask, what I am kicking myself for not asking, was what gave her the right to call my parenting into question, to undermine me in front of my children, to tell me off in front of the counter staff and other customers. I’m not sure that I’d have been brave enough to do that. But I could not let that “advice” go without reply.

I’m trying to understand it, why do strangers feel that they should comment? Do they believe that they know better than the parent who knows their own child?

Perhaps they mean well. But it seems that all social barriers, all manners and restraint go out the window when confronted with a parent and child. The same people are unlikely to approach unaccompanied adults to tell them that they are being rude, or behaving inappropriately, but when a child is in tow, all bets are off.

A little boy made a mess, his mother told him off and insisted that he make amends. If I had ignored his behaviour others would have judged me for letting my child carry on like that.

Don’t get me wrong, I regularly ask for advice from friends, family and colleagues. I beg for help with my fussy eater and my nightwaker. But when I’m on an outing with my children I seem to have a neon sign around my neck with the message “How’s my parenting? Let me know”.

So next time you’re in the supermarket, or in a coffee shop, at the school gates, look left and look right, because the backseat drivers are watching.

***** Would you like to give an old post another day out? Maybe you felt it was missed? I would be happy to feature it here in this series. For details please read here or use the contact me link on my blog header.