How would you feel,
if you just finished a nights work,
organising the teaching of almost ninety children to swim?
Wrecked, tired, irritable, weary?

Well actually no that is not how I feel.
I feel, young, invigorated, happy, buzzing.

As I opened the doors to the pool tonight,
a stream of children poured out.
Among them were the seasoned older children,

shouting, smiling and waving,
delighted to be back after the Summer break.
The eight and nine year olds,
who a few short years ago,
were the shy, quiet anxious beginners.

Then towards the back they came.
The five year olds,
all decked out in hat and goggles,
fingers in mouths,
and hands clutching their parents.
Many of the parents too,
I must say appeared to share their anxiety.

In the water waiting to welcome them,
were the older club swimmers.
Now fifteen and sixteen years old.
Some still swimming competitively,
others swimming just once a week.

As I watched them,
interact with these tiny tots,

managing to engage those who were shy,
and holding as lovingly as parents,
those who were overwhelmed, or fearful,
I felt so proud to be part of this group.

I was watching a complete circle.
Beginners, improvers and proficient swimmers.
A percentage of the beginners tonight,
will go on to swim at a high level.
However the majority will go on to just swim.

I think back tonight,
to my own rocky time learning to swim.
I can still remember the fear,
the tears and the tantrums,
until eventually my mother in exasperation,
told me she would “never again bring me swimming”.
The happiest day in my young life.

A few years later I chose to return.
There I met a lady called Louise,
who changed everything.
For she not only taught me to swim,
but to love to swim.

Over the years,
I will teach most of these ninety children at some stage.
They will learn all the strokes,
until eventually they are proficient.
“The best they can be”.
However that is not my main goal.
My main goal will be,
with the help of all the club, 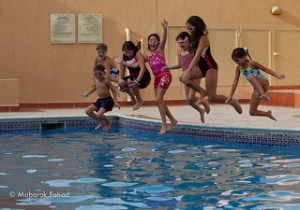 to foster in each child,
the ability to swim,
and the love of swimming.

For if I can teach them that,
I will have been a successful teacher.
They may go on to swim competitively,
or just for leisure,
but whatever their swimming ability,
in many many years time,
when my own teaching days are over,
my wish is that they will still be swimming.
Loving what was first began,
on a September night aged five years.