Last weekend yer man and I headed off to Prague for a few days. It was a fabulous break in a very beautiful city. A trip such as that can of course highlight the many differences between the two of us, such as my love of history and interest in castles and churches which I could spend hours looking at and reading about, compared to yer man’s interest in them which lasts a few minutes at most!

Those of you who follow this page on Facebook will also be aware that while we may know the history of Prague our sense of direction isn’t great. We knew there was a famous bridge called Charles Bridge so we set off to find it. After a relatively short walk in the wrong direction we eventually sorted ourselves out and finally found it. Posing to take a few photos to mark this special moment we  looked further down the river. There was another bridge in the distance, a pretty looking bridge, with a rather enormous number of people walking it. It would appear that our much photographed, less than special, rather empty bridge was not Charles Bridge after all.

Ah well at least there was tomorrow.

Going to a foreign city always reminds me of my Irishness, as I listen to natives speak their own language, spend foreign money and wonder will we chance some native food? Over the few days I compared our two countries and admired the many traits I saw in those around me, gaining an insight into who the Czech’s are and what they have come through as a nation.

We are home a few days now and the memories remain very clear. However, last night I was out and I found myself once again thinking of what it is to be Irish. There are many things about my country I’m not proud of, but am I proud to be Irish?

We were gathered at a friends house and the food and drink was flowing. We’d met early and I’d imagined we might be home by 1.30 am. What was I thinking?  As we say here, ‘we were having great craic,’ when at 2.30 am the first song was sung. Quite a number gathered were pretty talented in the voice department and with vocal cords well lubricated a great variety of songs were belted out.

One of the songs we listened to, sung by yer man, was called, ‘Sweet Kingwilliamstown.’ This was the old name for his home village, now called, Ballydesmond, and the story behind this song is very interesting.

It was composed by a young man, named Donal Buckley, who left Ballydesmond as a third class passenger on board the Titanic. When the boat was sinking he smashed the gates which stood between the steerage passengers and rescue. He got himself onto a lifeboat and made it to the US. Subsequently he enlisted in the army and fought in World War One. Tragically he was the last American soldier to be killed.

Sitting there listening to songs, some of which dated back over a century, and possibly mellowed by alcohol, I took a moment to feel proud and happy to be 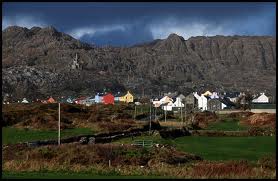 Irish. We have a wealth of history and a treasure trove of songs and poems.

However, like it or not our world is changing, our culture more easily influenced by outside forces. ‘Trick or treat’  and Black Friday are now firmly embedded in our calendars. As I sat listening to those old songs and the history they spoke of I wondered if I was witnessing an ending?

These songs are no longer taught in schools. Will future generations learn them? Will my children one day gather with their friends and share them with the next generation? Or will they discard them in favour of the songs of the world they now live in?

Only time will tell, but as I arrived home at 4.30 am I thought… great friends, great sing song and yes, it is great to be Irish.