Why do I ask? I refer to the arguments currently doing the rounds against same sex marriage here in Ireland, one of which is that if a gay man marries and adopts, their child will be denied a mother. It has prompted me to ask can only a mother mother, or a father father?

I put my hand up here. I was that mother. I still am that mother. However does that mean my husband is incapable of fulfilling that role without me. If I were not around would my children have no one to act as their confident? Would they be without all that I give them?

I do not believe that to be the case. My mother has a wonderful saying, ‘You have them as you rear them’. In my case I created a monster. I believed I quietened my children quicker than my husband, so why would I let them cry for longer than necessary? I made their dinner the way they liked it, so why let him do it and see them refuse to eat it? Yet if truth be told I am convinced that if my husband had been the primary carer and spent as much time with my children as I did, putting them to bed more often than I, or getting up during the night to soothe them every night, then they would have been as content to be with him as they are me.

I have watched two families lose their mothers at a young age. Prior to their mothers death the fathers were far from hands on, and perhaps not ideal choices to be left as primary carers. Then very sadly they were thrown in at the deep end and all I can say is “Wow”. What wonderful parents they became. A softness emerged which was never there before. They had no choice but to become mother and father and they filled the roles so well. It has made me believe that we fulfill the roles we are put in, but we can play any role if required. 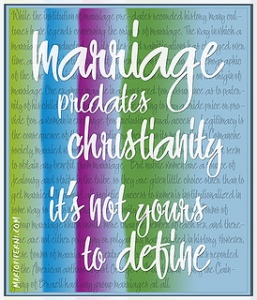 I strongly believe that two men or two women are just as capable as rearing a child as one of each. I do not believe a mother is essential, nor a father. Yes it is good to have one of each, but is it any better than having two of the same sex?

I have a brother who is gay. A wonderful, caring, loving person. My children love him dearly, and he is god father to my youngest. He was my soul mate as a child and continues to be a significant person in my life. He would have made the most wonderful parent and the world is a poorer place without the child or children he would have reared with his partner of eighteen years. What a team they would have made.

He is however not asking to adopt children, although I would fight for his right to. However he is forbidden to marry. Can you imagine that? Imagine living in a country, a modern western country, knowing you are ‘forbidden’ to marry. Imagine being with your partner for so many years, but no matter how much you care for each other your partnership is not recognised by the state. There are people you will pass on the street who believe you should not be allowed to marry have children, as if you are different. Less than a heterosexual.

Last night in response to a programe on television, I tweeted,

‘Can’t believe I lived for years with a real threat to the fabric of Irish society, my gay brother. He seemed like such a lovely fella’.

My tweet attracted the attention of another who tried to point out to me that if my brother adopted he would be denying that child a mother. I didn’t bother to argue, as there is no arguing with ignorance, but it has infuriated me all day. Not so much the belief he is potentially denying a child a mother, but the belief that a real family, the only family we should aspire to, is one with a mother and a father.

For it is my belief, that if they had been given the chance my brother and his partner would have done just as good a job at rearing their children as I and my husband have done.

Here in Ireland we are edging closer to the referendum on gay marriage. I am proud we are having this conversation, and that the country is getting the chance to right a wrong. However it is not a done deal by any stretch of the imagination. I just hope the numbers come out and vote, and that this country makes the right decision.

Then I’ll just wait in hope of a big day out!