For anyone who is my facebook friend,  you will have read today’s status update,

Picnic packed, dog packed,kids ready. Dress code shorts. Off on West Cork mystery tour. Only problem is I’m the driver and I’m pretending I know where we are going, when in fact I’m just winging it!

So where did we go, and how did we get on?

Well sometimes I think those posts where you hear all about what we did blow by blow, can be a bit boring, so instead I’ll give it to you in a nutshell, and if anyone wishes, they can read on for the extended version of the day.

If you want the detail here it is.

My plan for the day was for us to go for a bit of a  hike. However as the time ticked nearer I began to get a bit nervous. Not because we wouldn’t be able for it, but I was unsure if my companions. two teenagers and an almost teen, would agree the view was worth the effort. 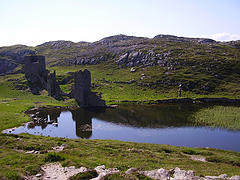 Then they decided that we couldn’t go without the dog. Now she is a little beauty, but one glimpse of a cow or a sheep and she goes off her face barking. The walk somehow sounded a whole lot less peaceful all of a sudden.
So in my head I had to cancel plan A and quickly move onto plan B.

However I had no plan B.

I was certainly not going to admit to that, so with a picnic packed I drove off confidently. I’d named it the ‘West Cork Mystery Tour’ so at least I knew the direction I was traveling.

I gave the gang a few ‘rules’.
Only positive feedback would be appreciated by the driver.
No asking where we were going.
The driver was to be praised regularly.
On the way home they were to remember rule one.

From listening to their conversation I figured they would be happy to go to a beach and somewhere for a walk. So off I headed to a large busy beach. However I remembered the dog and we figured that to arrive at a beach with her all excited, would not be a good plan. There would be the crazy pulling on the lead, and lets not forget the barking.

So remembering we had passed a forest we doubled back. It was not quite the beautiful forest walk you might be imagining. In fact it was just a small narrow forest path off the road. However not to be put off we pulled into the tiny space by the entrance, just big enough for two cars at a push, and turned the engine off. 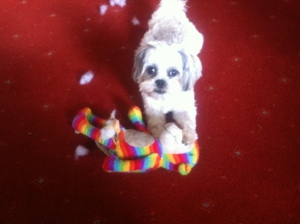 ‘Oh no, oh God no’ were the roars I heard from the back seat. Now I know this was not the most spectacular looking walk, but I didn’t see the need for them to dismiss it so loudly. Then they continued, ‘She’s been sick, oh yeuck, this is disgusting, oh no get her out’.

Yes, just as we’d stopped the poor dog had chucked up.

I got out, laughing, and opened the back door. The two girls were paralysed with their legs in the air, while the dog was looking miserable. I took the dog out and went in search of something to clean the mess up.

As I looked into the boot I realised I’d packed as you might say minimally.  We had no towels  for a beach, no tissues, no spare clothes, and definitely no sick mopping up equipment! As I stood staring into the empty boot I thought this was not a great start. With that thought the first drops of rain began to fall. Just brilliant!

I grabbed the messed up mat out of the car and used our drink of water to clean it off. Not wishing to go into too much detail, my socks were also used (and subsequently binned).

By the time I was sorted, the shower was passing and we decided to go for the walk anyway.

Just a few short steps along the path we began to smell it. A strong agricultural smell. We hoped it would lessen, but in fact it just got stronger, so we abandoned ship so to speak and hurried back to the car, breathing as little as possible.

After that poor start,  the good news is we had a great afternoon. We spent a short time on the beach and then headed to a quieter spot. Stopping along the way we went to a lovely quiet inlet, where we competed at skip skap, while the dog was let off the lead and nearly lost her life she was so excited, even venturing in for a swim, admittedly not realising the water was deep! From there we ventured onto another cove and eventually headed home via a very busy Kinsale where we finished the trip off with ice creams.

Having arrived home tired we had our very favourite dinner. Chinese takeaway! All in all it was a great afternoon and we even brought home a souvenir.

At least half the beach in the car, and the other half on the dog!

8 thoughts on “We’re off on a West Cork Mystery Tour, you are welcome to join us.”