Todays second chance repost comes from the blog The Chatter Blog. An inspiring post definitely worthy of a second chance.

When I was 31 I weighed in at a good 220 pounds.   I was “content” with life.   But didn’t have any real aspirations.   Nothing defined anyway.   I knew I didn’t want to be fat.  And I knew I didn’t have any goals.   I had a college degree and a decent job.  I had family and goodness around me.   But I wasn’t really doing anything with myself.   I wasn’t writing regularly.   I wasn’t involved in church.  I was somewhat involved in community but then again…not really. 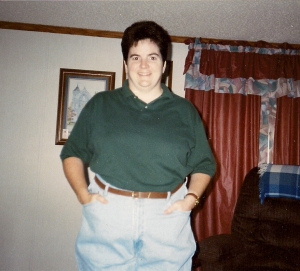 Then my ten year old daughter was involved in what turned out to be a life altering incident for me.   To summarize;  she tried out for a cheer leading squad.   She spent a week going to the camp.   Practicing at home.   Being in love with the idea of cheering and belonging to a group of girls.   It was through her school.   She did not make the squad.   But the demoralizing part was the way she didn’t make the team.   The “big girl” cheer leaders from high school were part of the cheer leading camp.  At the end of the camp they gathered the large crowd of little girls in the gym.   Parents gathered behind.   Each big girl had a flower.   Each big  girl presented her flower to one of the little girls chosen to be on the team.

You would think that was a sweet method to welcome those little girls.   Okay, one mom, me, did think that.   For about two minutes until they all finished.   The “leader” who was an adult coach said to the rest of the girls “that’s all”.   I was stunned.   No speech before or after saying “great job girls”   or “keep practicing” or “there are only so many spots or else you would all have been chosen”.    Nothing.  There were literally no words of thanks or encouragement for those little girls left sitting on the gym floor.

This is where the parents stepped in.   Scooped  up their kids and left.  I was pretty irate.  My child cried for what now seems like 2 weeks.  And I think it was 2 weeks.   So I took matters in to my own hands and told daughter we were going to find something else for her to do.

Martial arts.   There was only one local class.   I signed her up.  I took her to every class for a month.   I sat my 220 pound body on the floor or the chair if available and watched her for a month.   Then it occurred to me that I was there for 4 nights a week.   Why not join?   I could do this.   Surely it would be good for me.    Right?

I did join.   I gained 15 more pounds.    But I worked out.  And I practiced.   And I had direction and goals.   I had motivation.   My daughter and I worked and worked.   For two and a half years we sweat, we strained, we learned.

Then I blew out a knee.   That’s okay.   I got it fixed.   Which ended up in a blood clot.   Which took me off of my working out feet for about 3 months.   But I wrote down my forms and my steps and practiced in my head.   Literally.   I feared forgetting.

Then life changed in a way no one can prepare you for.   My dad died.  This shocked me.   Terribly.   Death?  His life is over?  Just like that?  This scared me.     This didn’t stop me from proceeding.  It encouraged me to go forward.   Very shortly after my dad died I was talking to my instructor about testing for black belt.   She wanted to speak with me privately so we went to the “office”.   We spoke about requirements for the test which was about a year or so away.   She asked me what my goal weight was.  I told her “one hundred and sixty pounds”  I knew because I had always thought I would be healthy at 160.   She said “that is one of your requirements”.   I said “what?!  I’ve never been able to lose weight”.   She said “what have you done to try?”    I had no answer.   She smiled.   And I smiled.   I had not tried.

My daughter and I were approaching a goal that many may not have understood.  It was not easy.   The physical requirements were, in my opinion, harsh.  But, also in my opinion, worth it.

Until I broke my neck.   Okay, I say that for emphasis.   But it’s true, in a long story way.   I injured myself just months before my daughter and I were going to test jointly for a black belt.   We had spent countless hours training.   We were doing this.   I remembered as a beginner learning what  a black belt had to do to test.   And I very vividly recall saying I would be happy to get to dark blue belt but I would never test for black belt.   Yet here I was.  I was going to test for black belt!  I was not afraid of the stressful and strict testing guidelines.  I was actually doing this.

The injury was not immediately diagnosed.  It was masked by floating pain.  Once it was diagnosed it was an urgent matter.    The day after surgery I was asking a doctor, who was covering for my surgeon in  morning rounds, questions about my options.   Can I ride my bike?   Can I lift my hand weights?    He put his hand out to hush me and said  “you realize we had to break your neck to fix you, right?”

No, no I did not realize that.   That’s not how my surgeon explained it to me.   But when I asked him on his next rounds, he did confirm this.   But he let me ride my exercise bike.

A few weeks later I dressed in my do bak (uniform) so I could go on the floor and be there when my daughter tested for her first dan.  First degree black belt.   I was so proud of her.   So happy for her.   So in control.   It was because of her that I was here anyway.   It was her life that got me to look at my life.    At the end of the test you have to break a concrete block with your hand.   She prepared to do this.  I sat on the floor  to take the picture just as she broke it.   And break it she did.   I put the camera down and smiled.   She did it.   Then I was taken by surprise when overcome by a flood of tears.   She did it.   I lifted the camera back to my face and took pictures until I could get off of the floor.  This is the picture I took: 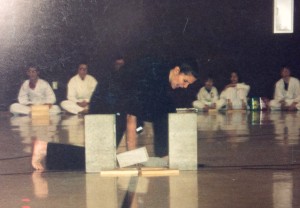 Six months later I woke up one May  morning.    I went to the cemetery and put a dozen carnations on my father’s grave.   Each one colored a different color to represent each color belt I had worked through.   I went to Columbus.    My mother sat in the audience and I gave her a dozen carnations, colored like the one’s I had placed on my father’s grave.  I walked on to the floor.   I bowed in.   I weighed 155 pounds.   I was solid.  I was strong.  I had long ago passed the test that got me to this test. 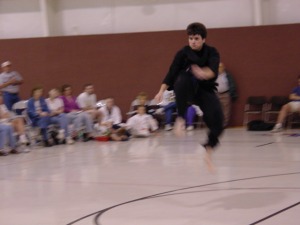 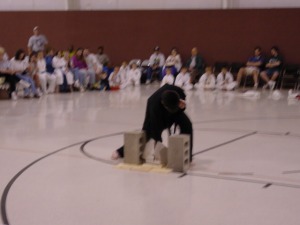 The test.   That first test.  Was about my life.   Opening my eyes and realizing I had to participate.  I had to join my own life.   I had to wake up every day wanting to accomplish something.  Work was not something I did nine to five.  Work was what I would have to do to own my life, my self.  Work is good.  Through work you understand accomplishment, joy, and even peace.   Without it you don’t know the meaning of vacation, rest and fun.  Without work you do not know reward. 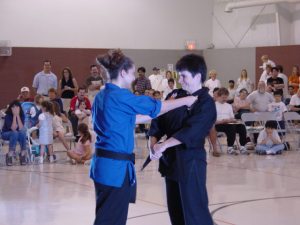 In this picture my fifteen year old daughter is “punching me in”.   It is a ceremonial process where all black belts of the school welcome you with a “punch” to the heart.   In the background is my youngest daughter with her hands over her face, celebrating in the emotional moment for the three of us.

It sometimes stuns me that a poorly run cheer leading camp for little girls that I really had nothing to do with is what changed my life.

Whoa!  Epiphany!!!  Maybe it was me that actually changed my life!   Or maybe I just decided to live it.