I’ve been missing in action. A lot has been going on here and sometimes something’s got to give. Unfortunately it was blogging.

However I thought I’d pop by and let you know I’m alive, but only just, because believe it or not for two weeks we’ve had ridiculously hot weather.  Yes it’s been roasting for two weeks and not a drop of rain. I’m slowly dying a death, melting away, but I’d be murdered if I complained, so I slap factor 50 on and sit in the coolest room I can find.

However, I thought you might enjoy an old post which was possibly the last time such heat came to this island of ours.

What happens when the sun shines in Ireland?

Last week something very unusual happened. I know for many of you it would not even register in your day. For me however it was mind blowing.

Every day for a whole week the sun shone!

Most days there was not even a cloud in the sky. I cannot remember the last time this happened. Rumor has it that it was one week in May last year. Personally I reject that rumor.
I think on that occasion we ran out of sun after five days.

On the first of our sunny days last week Ireland woke up and held its breath.

Was it just the usual joke where the sun shines until we all get dressed in our shorts and t shirts,
venture out and a wind whips through you moments before the rain begins?

Having been fooled so many times we were careful. We were no eejits. That first day we wore our more usual summer clothes, long pants, and jumpers!

We died a death.

So the next morning when we awoke and saw another beautiful day dawning, we dared to hope. Clothes usually put away for our two week holiday abroad, were dusted off and worn with delight.

By the end of the day the sunshine had begun to affect the whole nation. As we walked down the street, friends and strangers shouted,
“How are ye? Isn’t it glorious?”

It didn’t take long for our true Irishness to emerge.
“Did you hear poor Mary and her gang are gone off to Spain. Nothing but cloud over there!”
“Ye, sure Sean and the family are in Lanzarote and it’s raining!”

Nothing could make us happier than hearing these sorry tales.

As the beautiful weather continued,
I became more and more aware of how we Irish, 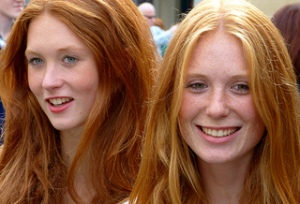 were obviously not a nation naturally born to tolerate sunshine.
The Irish skin is of a milky white nature,
often covered with an infinite number of freckles.
The Irish mentality is to love dark skin,
and to believe that some day with effort,
Irish skin can be transformed to that of a Mediterranean nature.
Sallow and brown.

As a result, by day three of ‘Summer’ half the population were wandering about with glowing bright red faces and stripey red legs. Shoulders and backs looked like they should be treated for burns.

By day five another change had begun. Normally Irish people are stunned when they meet anyone who decides voluntarily to holiday in Ireland. The only reason they can acceptable explanation is that they’re American and coming over to investigate their family tree. 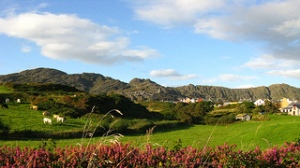 However because of the beautiful weather national pride began to swell. We were greeting strangers and our fellow countrymen with cheery smiles,
“Best country in the world.”
“Who needs Australia?”
“Isn’t Ireland a great place to live?”

Our beaches were packed, not an inch of spare sand to be found. Passing by department stores,
you could be forgiven for thinking that looting was rife. Hoards of people were pouring out,
arms loaded with sun chairs and food coolers. There was a run on burgers, steaks and anything at all that could be thrown onto a barbecue.

The true nature of the Irish is the love of “craic,” and the long warm evenings were perfect for it. Any excuse for a gathering. It was time to party. So tools were downed, work was forgotten,
and for nearly a week the country went on holiday.

Unfortunately my daughters teacher did not seem to understand that Summer was happening.
So as my daughter happily played outside, I completed her maths homework each day,
Her teacher was pleasantly surprised when she got her maths all right for a change! 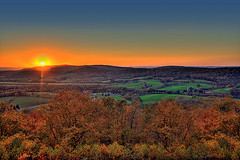 What a wonderful week it was.

Sadly today our Summer is over.
Dark clouds have returned,
the sun has moved on and temperatures lowered.

The redness of skin will fade soon and the country will go back to work.
However the smiling and good feeling will live on as we talk for the next twelve months or more
about the fantastic Summer we had.